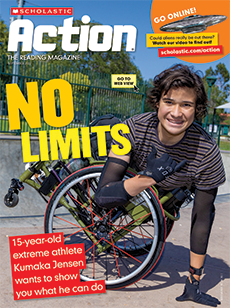 When he was your age, Jason Reynolds hated to read. So how did he end up being a famous writer?

Jason Reynolds has written 12 books. He has 31,000 Instagram followers. And he’s traveled around the world to share his stories and poems. But there’s something surprising about this superstar author: He was 17 before he read a book cover to cover. “The books we read in school were boring to me,” he says. “That’s the truth.”

What’s Jason’s goal today? To write books that aren’t boring. That means telling stories about what kids are really going through. We talked to Jason about how he became a best-selling author.

What would you say to a kid who doesn’t like reading?

First of all, I’d tell them that it’s OK. There’s nothing wrong with you. Then I’d ask: What are you interested in? Because if you like video games, you can read books about video games. If you like sports, every newspaper has a sports section. There’s more to read than just books. Reading comics counts. Reading rap lyrics counts.

Why was reading boring for you?

Growing up as a black boy, I didn’t see myself in many books. They weren’t about the things my friends and I were going through.

How did you go from being a kid who didn’t like to read to a famous author?

When I was 10, my grandma died. I wrote a poem for my mom because I wanted her to stop crying. She read it at the funeral, and I realized how powerful words could be. I wrote my poem like rap lyrics, because that’s what I liked. Then it hit me: What rappers do is writing too!

What traits make you a good writer?

I learned how to crochet as a kid. That taught me what it takes to write. I learned to pay attention to the details and be patient. I also learned to work hard until something is finished. And it’s such a good feeling to finish something!

I come from a really fun family, so I like hanging out with them. When I’m not working, I’m in the house, chilling out. My friends come over and we watch TV and joke around. And I love to eat!

Anything else you want to tell Action readers?

Let them know that I love them. I’m serious, no joke. Tell them “Jason Reynolds really loves you.”

Jason wants to write books that aren’t boring. Think of a word that means the opposite of “boring” and write it below.

What are two traits that make Jason a good writer?

Find the sentence in the article that describes why Jason wrote his first poem. Write it here.