We’re extending the deadline for our True Teen Story contest to March 15th. Click here to get the details!
Explore
Dismiss

Sharing Articles with Your Students 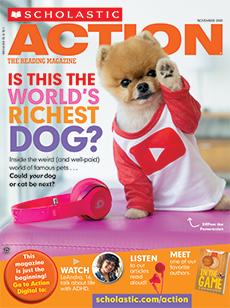 What does it really mean to be a champion?

It was noisy and hot and crowded inside The Foot Palace. The line was long. And Cory realized pretty quickly that they should have gotten there earlier. This was the first day the new Isaiah Jackson Retro 4s were on sale. Everyone wanted them.

“So this is what kids are doing these days,” Cory’s dad said. “Standing in line to buy overpriced sneakers?”

“Not just any sneakers, Dad,” Cory said. He peeked ahead, trying to count how many people were in front of him.

“You are all welcome to keep waiting,” a woman in a striped Foot Palace uniform said. “But our supply of the Isaiah Jacksons is getting low.” She called out the sizes they still had left.

“Eight-and-a-half. That’s me!” Cory said. He could feel his heart beating faster. “But what if we don’t get up there in time?”

“Eight-and-a-half? Are you sure?” his dad asked.

“I’ll be right back.” His dad walked straight to the front of the line. Leaning over the counter, he said something to the cashier. Five minutes later they were leaving, and Cory had a box under his arm. On their way out, Cory heard the woman in the striped uniform again. “Eight-and-a-halfs are now sold out,” she said.

One boy who had almost made it up to the counter pulled up his hoodie and stepped out of line. Cory figured he must have wanted the eight-and-a-halfs too.

As they were leaving, Cory glanced back one more time. The boy in the hoodie looked really sad. But then again, so did a lot of other kids. There wasn’t anything Cory could do about that.

He followed his dad out of the store.

Cory slowed down and waited. Jason was one of Cory’s best friends. He was also maybe the best player on their travel basketball team.

“You going to check who made it to the tournament?” Jason asked.

“Yeah, my dad said they’d be posting the list after school today.” Cory’s dad was the coach. Only the top three players would be chosen. And Cory was confident he knew who they’d be.

“You think my name is on there?” Jason asked.

Cory rolled his eyes. “You joking? Of course it is. You know we’re going to be numbers one and two on that list.”

They walked past the cafeteria, the science lab, the band practice room, and the teacher’s lounge.

“Whoa!” Jason suddenly came to a full stop. He was looking down at Cory’s feet. “You have the new Isaiah Jackson Retro 4s?”

Cory had to smile. He lifted his left foot, then his right.

“So fire!” Jason said. “Before my brother went to college, he used to make me watch all Jackson’s old games. He was the best.”

Jason started throwing out Isaiah Jackson facts—his height, where he was born. “I didn’t know you liked him too,” Jason said.

Cory actually didn’t know much about Isaiah Jackson except that the shoes were cool. He didn’t know what to say, so he started running. “Ready? Go! Let’s find out who’s number three!” he said.

Jason chased after him. They were both out of breath and laughing when they got inside the middle school gym. But when they saw the list, their mood changed. Taped on the wall, it said: 1. Cory Brandt. 2. Will Costa. 3. Matthew Reilly. Alternate: Jason Williams.

“How could you not pick Jason?” Cory asked as his dad drove him to the tournament. They had been arguing nonstop since yesterday afternoon. “You know he’s better than Will or Matt! Everyone does.”

But Cory’s dad had a million reasons. Mr. Costa worked with Cory’s dad. The Reillys were old friends of the family. And both boys were very good players.

“It’s just one tournament,” his dad said. “There will be others.”

So maybe his dad was right. There would be other times Jason would get to play. But now, Cory had to focus. He couldn’t change anything. And he didn’t want to make it worse by worrying through the whole game.

The four boys were taking off their sweats and stretching out on the bleachers. The game before theirs had just ended. Matt, Will, Jason, and Cory hurried out onto the court and began warm-up drills.

The announcer behind the scoreboard picked up the microphone. “Each team must have three players and one alternate. Ten-minute halves. Running clock. No timeouts.”

It would be two short games and then the championship. Only three players, no subbing in and out. The alternate was there only in case something went wrong. Jason would never get to play.

It’s just one tournament, Cory thought. There will be plenty of others.

The horn sounded, the clock started, and their game began.

No time to feel bad.

The other team was good. At halftime, it was a tied score. Matt, Will, and Cory were playing well. They pulled ahead in the final minutes, and the game ended 34-32.

Jason stood up and cheered the whole time. The second game was an easy win, 54-34. Again, Jason rooted for them from the bench. His cheering made Cory feel even worse.

“I’m going to fill up my water bottle,” Cory told his dad.

“OK, but I want you back here to watch this next team play. They’re the ones to beat if we want to win the championship.”

The other team was legendary. They had one kid with a highlight tape on YouTube. Another player was so tall that he looked like he could dunk without jumping. It would be a tough game—even if Jason were playing. Which he should be.

The hallway outside the gym was busy. Cory was at the water fountain when he saw Jason’s older brother coming down the hall. Cory had met him only once. But he was sure it was him. He was wearing an Isaiah Jackson throwback jersey.

He must be home from college to surprise Jason.

Cory slipped back into the gym. He watched as Jason’s brother took a seat on the top bleacher, behind their bench. So far, Jason hadn’t seen his brother. And unless he turned all the way around, he wouldn’t even know he was there. Jason wouldn’t find out until the game was over, and he probably wouldn’t have played one single minute.

Four of them gathered for a hand-stack. Only three of them ran out onto the court.

But didn’t grown-ups always say “life’s not fair”? Besides, it wasn’t Cory’s fault his dad was the coach and had picked the team.

Except it didn’t feel good to feel this bad. There would always be plenty of other times. But this one should have been Jason’s—and it still could be.

The whistle blew. The clock was set to 10 minutes.

Cory, Matt, and Will ran out onto the floor. Cory shouted, “Hey, guys . . . flying chest bump!” When he came down, Cory rolled his ankle and fell to the ground.

I should whimper a little. OK, maybe a lot.

His dad jumped up and ran onto the court. “What happened? What’s wrong? Can you get up? Can you play?”

“You barely fell,” his dad said, kneeling down. “Let me see that.”

When his dad touched his foot, Cory cried out.

“This kid isn’t playing anymore today,” one of the officials said. He looked at Cory’s dad. “You got an alternate?”

This trophy wasn’t one of those that fell apart before you got home. No, this was real, shiny metal. It was huge, and it went to the winners of the Three-on-Three Invitational Showcase Tournament. Jason had been on fire, and they had won the final game, 54-53.

Cory was sitting on the bench with an ice pack on his foot. But his teammates made him hobble up for the photo. His arm was wrapped around Jason’s shoulder for support.

“Say ‘Champions!’ ” the photographer called out. She snapped the picture. It wasn’t until then that Jason looked up and saw his brother.

“It’s fine,” Cory said, because it was. It really was.

The boys started packing up their gym bags. Cory would have to tell his dad he faked the injury at some point—maybe even tonight.

There would be plenty of other tournaments.

But today everyone got to go home happy.

You’ve just read “In the Game.” Now it’s time to try this activity.

Tip: An inference is something that is not stated but can be figured out from clues in the text.

What to do: Imagine that you are Cory, the day after the tournament. You decide to tell Jason the truth about your injury, and he has some questions. Make inferences to answer each question below with at least one complete sentence.

Jason: What bothered you as you were leaving The Foot Palace?

Jason: What did you think of your dad’s choices for the three main players in the tournament?

Jason: Why did you pretend to hurt your ankle in the tournament?

Jason: Why did you decide to tell your dad the truth after the tournament?

Get the digital lesson plan for this article